A matter of trust - Why we are afraid of self driving cars and why we shouldn't be.

'With each new piece of technology, the same fundamental question arises: can it be trusted? Price and availability matter, but nothing is adopted unless the target user feels able to trust it.'*

Try to imagine yourself in a driverless car. How would you feel? Excited? Nervous? Would you trust the car completely and go for a nap? Or would you feel anxious, keeping your hands close to the steering wheel, prepared to take action at the moment the car does something unexpected?

Almost every car manufacturer is investing in driverless cars at the moment. Governments, like the US and the UK, are preparing for the vehicles with new regulation guidelines and laws. And discussions about the ways the cars will be used in the future are up and running; will the cars be owned or shared, and which US state will win the battle for the best testing ground?

Through all the fuzz we would almost forget that there's just one tiny little group that doesn't seem to be convinced of the new technology yet; the people that are actually going to use the cars.

It turns out, most people still distrust self driving vehicles and are scared to go for a drive with them or to be in the traffic with autonomous vehicles driving around.

According to a new poll, held in the Unites States, 64% of the people are concerned about having driverless cars on the road and 51% of the respondents said they wouldn’t ride in an autonomous car at all.

If you zoom in to this number you'll see that it's mostly the baby boomers and generation X that are scared. The millennials are less worried, but still almost half of them wouldn't trust the car completely.

Why do we distrust?

Distrust in fast developing technologies is nothing new on the horizon. But where does it come from?

First of all, it has everything to do with the extent to which we are used to technical adoptions and change. This is why the millennials are less skeptical towards the cars: Since their childhood they've been in the middle of the technical revolution, with the rise of computers and cellphones, and are therefore more used to fast change.

But also the Chinese population is more open to technical change. According to another survey held, the Chinese may adopt the self-driving car way faster than the Americans, because they trust the technology and feel more secure about passing on their data than Americans.

According to the HSBC report, the East is way more optimistic about new technologies, compared to the West.  They state that 'openness is correlated to social and economic change, with rapidly developing markets in the East far more experimental with innovation than in the leading mature economies of the West'.

Other reasons for distrusting  the the adoption of the cars is that we're afraid that our personal data is not handled well, or the possibility of our cars being hacked.

But, most importantly, we don't like to give our control and safety out of hands. It feels unnatural. Turns out that, in the end we trust ourself the most when it comes to keeping ourselves safe. 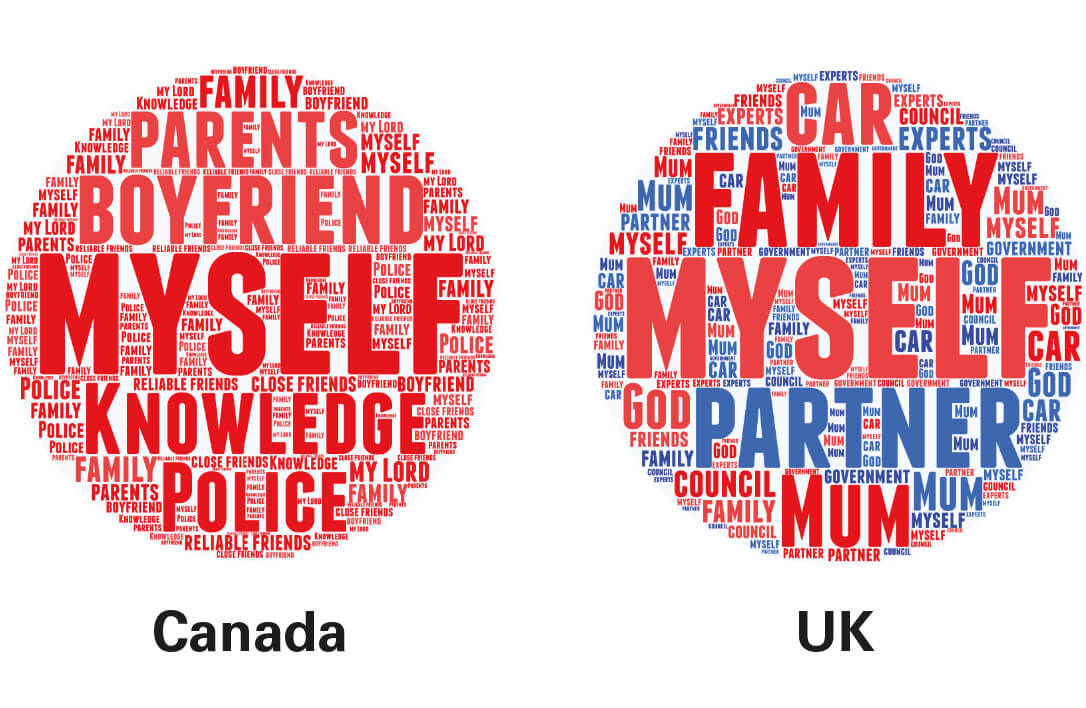 Figure from HSBC - Who do you trust to keep you safe?

And finally, the last reason for our distrust; we just haven't seen the vehicles in practice, which means we are not convinced yet. This is a reason for humans to distrust almost every emerging technology.  Trust in technology is built over time, based on hard evidence - Performance is what matters. To bring people on board, automakers and public officials will have to show them the benefits of self-driving and connected vehicles, even if they don’t ride in one.

Is our fear justified?

We can't give an answer to this until the cars have been adopted at a big scale. But we can do some predictions.

Have a look at this video:

Google's self-driving car, Waymo, has just released a new 360 video in which they try to comfort people and convince them that the car is to be trusted and is even able to see way more and react way better than a human driver would do.

Researchers found a way for the cars to look around corners and see if there are any obstacles, using laser technology. Something that humans would never be able to do. Many visionaries of the technology, like Elon Musk, say that someday, as technology advances, self-driving cars will be so safe, so accurate that we may ultimately have legislation that fosters autonomous vehicles, over vehicles driven by humans that notoriously just simply make mistakes.

Research has proven that 95 percent of car accidents are because of human failures. Alcohol and falling asleep as two of the biggest reasons for this failure.

We've always been afraid of new technologies or institutions to arrive, because we are just programmed to distrust new things. It's something we do to protect ourselves. But at a certain point, when the new technology has proven to be trustworthy, and has eliminated all the children's diseases, we often can't imagine a life without it.

Here's a meaningful quote from the co-author of a book named " the driver in the driverless car.":

“My grandchildren will ask me to tell them what it was like to drive a car in an old city. I’ll tell them it was scary, dangerous and wasteful.”

Also interesting to know - Last year, there were six incidents with driverless cars. Four of them were small incidents with almost no damage. Two of them, were caused because humans run on to the streets and tried to attack the cars. They were mad at the technology, being tested in their hometown.

So, should we distrust?

Of course, it's always good to ask critical questions when a new technology is on the rise. How will it handle our personal information? Who will be responsible if something happens? What jobs will be eliminated and which ones will be created? But history learns that we also adapt quite fast to new things, so our recommendations is to be open, ask questions and see what the future brings us. Only then we can move further as human beings.