4 reasons why the Google Cloud is the most sustainable data storage option.

"We are the first generation to feel the effect of climate change and the last generation who can do something about it." - Former US President Obama.

Although there are still some people (presidents included) who apparently don't believe in facts, most of us can be entirely sure nowadays; climate change is happening, and we just can't ignore it anymore. As a brand, this means we carry a responsibility to work as environmentally friendly as possible. Also when it comes to the data centers, we use.

More and more companies are switching to cloud-based data centers because they can see the advantages of it; flexibility, scalability & cutting costs. Another benefit many of us tend to forget is that moving to the cloud can be environmentally friendly too. I say can because the degree of this friendliness depends on the cloud provider you choose for your data storage.

According to the last Greenpeace report on the greenest IT companies of 2017, Google is leading the way within this area. But, as cloud computing is becoming more popular, the demand for data centers rises. As a result, more and more cloud providers enter the field, and many of them have a negative environmental impact.

Here are the four reasons why Google is the best option for you to choose if you want your data stored as sustainable as possible:

In 2011, Google was one of the first tech companies to sign a first Power Purchase Agreement (PPA) for wind energy, which is a contract between a clean energy generator and a clean energy customer.  The goal of Google is to run on renewable energy entirely at the end of 2017.

In their last report on the greenness of IT companies, Greenpeace mentions Google as one of the greenest leaders in the tech industry;

"Both Apple and Google continue to lead the sector in matching their growth with an equivalent or larger supply of renewable energy, and both companies continue to use their influence to push governments as well as their utility and IT sector vendors to increase access to renewable energy for their operations."* 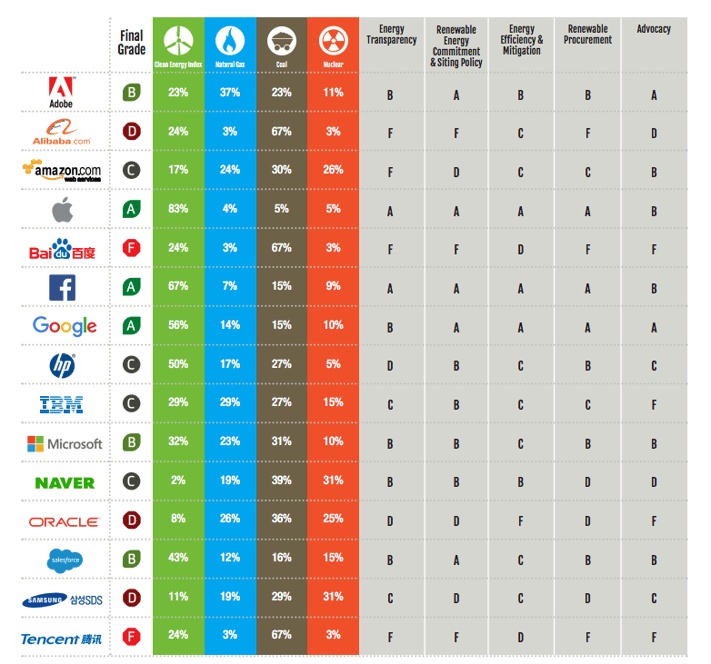 *Greenpeace report 2017 - Clicking clean: who is winning the race to build a green internet?

Google has 14 different datacenters all over the world. They were all designed from the ground to maximize their efficiency and minimize the environmental impact.*

Google applies machine learning in their data centers to make their energy usage as efficient as possible. Smart temperature, smart lighting controls, advanced cooling techniques and a redesign of the distribution of power to reduce energy loss, are some of the methods they use.

Google takes part in the circular economy on server management level. The circular economy is the alternative to the traditional linear economy (make, use, dispose) in which resources are being (re)used for as long as possible. Google is committed to achieving Zero Waste to Landfill and reuses server materials multiple times.

4. The difference with locally hosted servers

The Google Cloud platform and Google's products like Google Docs and Drive make it possible for businesses to switch from locally hosted data centers to Google public data centers, which are, as said before, efficient and based on renewable energy. Google's report states:

"Research from the Lawrence Berkeley National Laboratory suggests that if all office workers
in the United States moved their email and documents to the cloud, it would reduce the
IT energy use by up to 85%.4"

It is important to mention here that the cloud, in general, is not always the most sustainable option. The Greenpeace report states that with the growing demand for data storage, more and more datacenters are built, and many of them are not able or willing to run on renewable energy. Companies in for example South Korea are bound to utility monopolies which means almost all the power comes from fossil fuels. But also US-based businesses like Amazon have datacenters that run on coal and natural gas. In general, we could say that the growing data storage demand causes an increase in the demand for electricity from coal and other dirty sources of energy that are changing our planet’s climate. It's, therefore, crucial to provide support to the companies that give attention to our environmental issues and try to work as sustainable as possible. In this way they'll hopefully be able to pressure others to do the same; making the whole cloud market energy efficient and run on renewables.

Crystalloids offers cloud-based solutions, all based on Google Cloud Platform.